Paper with dance/film extracts exploring mobility as a dynamic continuum of densities.

The mobility of matter partly hinges on its density, and density is often shifting. Within our physiology and our environment, there are significant cycles of matter dispersing and reconfiguring: the water cycle of lake to steam to cloud to rain to lake; skeletal tissue dispersing as minerals into the bloodstream and reconfiguring excess back into bone; DNA performing frequent cycles of unraveling, duplication, and regrouping in order to birth new cells – a fundamental gesture of biological life.

Creative activity can be seen as a condensing of mind and matter into expression – drawing dispersed ideas and elements into a coherent event, mobilising and directing forces into the becoming of something new. Within Tibetan Buddhist philosophy, this is represented by the dynamics of the five elemental phases: from the openness of space (which allows even the idea of mobility), the free movement of air stirring introduces communication and momentum; fire generates a magnetising force, becoming more tangible, drawing in and digesting fuel as it moves along a certain path; developing then into water, coherent and strong yet still adaptable and transformative. When ideas take form, this is an expression of earth, which, like bone, is seemingly stable yet always ready to disperse again into mobility.

This paper is based in my creative research into the fluctuating density of the body’s physiological systems through movement and dance, and the development of the dance/film cast (2014), set along the Yarra River in Melbourne’s CBD – exploring internal and external flows of movement in this urban, pedestrian environment – and Postcards for John Cage (2015), filmed near the Hopkins River in Warrnambool. My presentation will feature clips from both films, along with a discussion of mobility as described by a continuum of density, marked by continuous dispersal and regrouping into coherence. 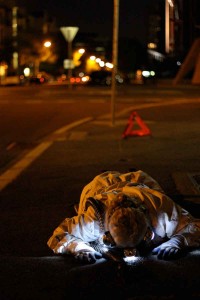