Fault investigates the multiple temporalities that matter registers through forces of contraction, dilation, folding, compression and erosion. Through video-collage, OSW explores the convergence of these forces that give rise to an earth that is ‘indelibly inscribed’ (Claire Colebrook). Anchored around the material specificity of a geological specimen, this work follows fissures that expose glimpses of differing tempos resonating from events that knot together accumulation and extinguishment.

Beginning with a Sea Lily fossil1 selected from the Natural Sciences collection at Museum Victoria, OSW presents a video-work of ‘temporal-fragments’ that visualise the movements of matter across durations, and complex convergences brought into relation by the specimen. Approached through the framework provided by the Sea Lily fossil, matter’s movement includes the massive sea-floor landslides and tectonic subduction that occurred over millennia, which contributed to the formation of the Eastern Australian coastline. The Sea Lily specimen persists as a tiny material remainder registering these processes, whilst also connecting with recent anthropogenic activity.

The circa 1903 event of this fossil’s excavation is contingent upon the brick-making industry reliant on the clay reserves that dominated West Brunswick. Formed by the ancient landslides taking place before the emergence of homo-sapiens, this clay provided the primary material for the Hoffman’s brickworks, a key supplier meeting Melbourne’s brick requirements in post gold rush development. The hunger for clay generated two extensive excavations on either side of Albert Street2, which widened proportionate to the surge in Melbourne’s built fabric.

The Sea Lily fossil has stimulated a process of temporal excavation through such relations, making apparent materiality’s complex durational qualities, and entanglements with the politics of extraction, forces of production, geo-bio-human history, energy and economies.

1 The particular fossil is a ‘holotype’ providing the initial description of its kind.

2 The first excavation was backfilled with domestic refuse from 1947, taking 17 years to fill. By 1981, it had settled sufficiently to be redeveloped becoming Clifton Park. Hoffman’s second pit became Gilpin Park, situated next to a contemporary housing development incorporating the remaining buildings associated with the brickworks.

a composite of screens or transforming matter(s) in time

The artwork Fault is a composite of many things: media, representations, thoughts and sensations. As as an artwork, it is a composite of screens, images, movements, spaces and times that OSW bring together for us as viewers to engage with over time.

OSW is itself a composite of individuals: Terri Bird, Bianca Hester and Scott Mitchell. Fault is not simply an illustration of pre-existing facts; it problematises our experience of time and our place amid it.

Fault is a composite of differing time registers:  geological deep time – the incident of a fossil, the compression of matter…  the historical time of settlement, of the gold rush brick building boom of Melbourne… the invisible time of the interval, the gap of the missing histories and of the continuing presence of the displaced, the replaced and the survivor… of transitional flows, natural, historical and personal.

These experiences are manifest through the differing pictorial structures and devices of the time of video. Collaged, montaged, juxtaposed and superimposed times/ situations are presented for us as viewers to negotiate in relation to the printed material’s linear yet layered chronological history.

Importantly, Fault manifests the felt time of ongoing change … the pulsing between the external time of knowledge and the internal lived time of the viewers, unfolding according to our intention and our apprehension of the visible.

Usually videos are active within their screens but static within their space. Due to the use of multiple screens and a sensitive use of placement, OSW offers us a geometry of screens like the predella in a Renaissance painted altarpiece. In doing this, it enables the viewer to move during the act of looking, activating a passage and movement in actual space and time, creating a dynamic relationship between viewers in front of and amid the unfolding complexities of information and sensations presented on the screens.

One of Fault’s contributions for me, is that it enables me to feel, it presents not only ethnographic knowledge, but it manifests how three people can collaborate to create a poetic work of art…  a vision encompassing deep times and short times… from the internal to external experience, from micro to macro and back… the work enables me to feel the poetics and mystery of time… here ‘Romantic’ awe meets the pragmatics of factual record.

Importantly, Fault enables us to become aware of way something is done, to become attentive to how an artwork is made, revealing the sensitivities of timing, placement and modulation within video installation.

In the end, I am left with a sense of wonder in the way diverse things are able to be revealed and brought together… the wonder of art in being able to assist us in recognising the wonder and vitality of life. It is in mediating this as experience through art that OSW in Fault gives us an understanding not simply of the intellectual or the aesthetic but of the felt. Fault energises us while at the same time enabling us to consider the wonderful connection between a fossil and a brick – reinforcing the fact that we are living amid an ever-changing world. 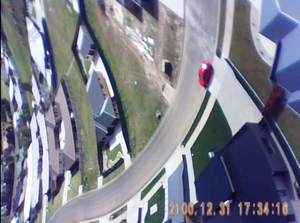 THE TOUR OF ALL TOURS 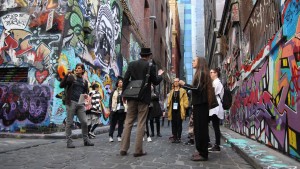 A performed guided tour of Melbourne whose subject is other tours.