A presentation discussing the non-translatable in relation to choreographic practice.

Most forms of translation, according to Gayatri Spivak, depend upon the idea that any text can be rendered in any other language, particularly where there seems to be a reasonable or moral imperative to do so. Much contemporary dance, however, confounds this proposition. Choreographic works will animate physical states, even fluid states, that do not easily translate into other languages, forms or bodies, in spite of the claims from objective research or symbolic interpretation.

In recent writings, I’ve been thinking about how sleeping and dancing are non-translatable. The time-lapse photographs of German artist Paul Schneggenburger, for instance, depict the unique and blurred movements of sleeping couples, with commentators describing these entwined limbs and torsos as a form of dancing without knowing (Caridad, 2013). For the attentive observer, this abstract gesturing produces a critical awareness of the estranged multiplicity of sleeping as a solitary, yet also intensely active, corporeal condition of the contemporary subject. On this topic, Lucy Guerin’s 1998 work Heavy playfully examined the resistance of sleeping to the scientific study of corporeal experience, while other more recent pieces, such as Chunky Move’s 2015 Depth of Field, or Guerin’s 2012 Conversation Piece, provide other challenges to translation of the contemporary. In his recent book 24/7, on ‘late capitalism and the ends of sleep’, Jonathan Crary has argued that sleeping is the last refuge of the individual in an era of networked and commodified experience. This paper will invite consideration of some of these ideas in relation to choreographic practice. 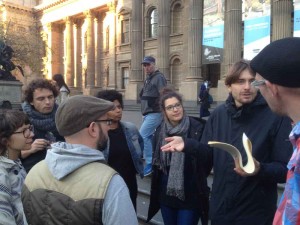 Enacting the choreographies implicit in the laws that regulate the uses of public space. 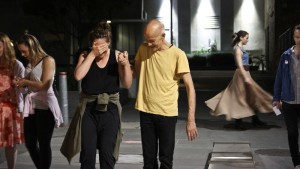