Means of shaping experiences of transit and making passage.

This paper begins by noting performance works that offer a critique of pervasive global mobilities. One example, Phil Smith’s In Search of Pontiflunk (2008), is a theatre project based on two walks: engineer Charles Hurst’s early-twentieth-century meander through the English midlands, planting acorns as he went, and Smith’s own journey along the same route a hundred years later. For Smith, as for many walking artists, his project is conceived absolutely in defiance of other modes of transport: he describes his quest as ‘two weeks of meditating on walking, on cars, on what our mobility makes us, on how transport no longer moves us, but misplaces us’. To walk, in this version, is to resist what Rebecca Solnit has referred to as the ‘postindustrial, postmodern loss of space, time and embodiment’ perpetuated in part through transport systems.

But transport need not always misplace us, and performance might do other than resist its momentum. The main section of this paper, then, considers works that engage with transport in order to harness its various possibilities.

I will discuss the intervention into railway travel staged in Don’t Fret by These Horses at the Five-Second Theatre (2005), Kutluğ Ataman’s mobilisation of a riverboat along the Danube in Küba: Journey Against the Current (2006), the collective shaping of a yacht from donated wood in Lone Twin’s The Boat Project (2012), and Marc Rees’s creation of a community venue out of a disused aeroplane fuselage in Adain Avion (2012).

Performance might usefully, I suggest, work against the design philosophy embedded in transit architecture that encourages the subject to ‘flow through the terminal, always on the way to some other destination, and simply passing through without registering passage’ (Pascoe 2001). In this approach, spectators are encouraged to register their passage not as uninterrupted flow but as a complex activity, simultaneously public and private, and culturally, socially and morally loaded. Further, by finding spaces within contemporary travel to create positive collective identities and develop new mobile narratives, performance might serve not only to register but also to make passage: developing not merely a commentary on travel, but a valuable means of shaping experiences of transit and thereby creating new momentum. 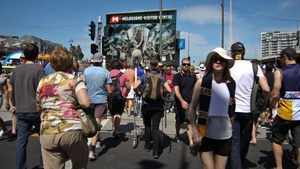