Serena Chalker is an award winning independent artist and co-director of Anything Is Valid Dance Theatre. She holds an M.A: The Body in Performance with Distinction from Trinity Laban Conservatoire of Music and Dance in London, and a BA (Dance) from the Western Australian Academy of Performing Arts. She works in improvisation, text and site-based dance practice. Serena’s is interested in questioning and re-defining the relationship between site, performance and audience. By challenging the boundaries between memory and experience, she looks to investigate the impact and effect of space on the observer. Serena seeks to challenge traditional modes of viewing and interacting with dance.

Serena’s works have been performed and presented in both Europe and Australia, including at the Process – Space Art Festival (BG); Water Tower Art Festival One to One: Charting the Personal Terrain, The Rag Factory (UK); Springhouse (DE); Fringe World Perth (AU); Noted Experimental Writers Festival (AU); Perth Institute of Contemporary Arts (AU); Short Cuts 2009-2013 (AU); In Short, 12-12-12 (curated by Chrissie Parrott); Hyperfest 2011 (in conjunction with Disability and Disadvantage in the Arts WA); the 2011 Beaux Arts Ball, Western Australian Academy of Performing Arts and the Adelaide Fringe where AIVDT won the Best Dance Award for their critically acclaimed work Life in Miniature. Serena was the original choreographer and for electro-pop band Empire of the Sun.

In 2014 Serena presented a first development at PICA of The Mapping Project, a participatory installation with Emma Fishwick exploring personal relationships and responses to spaces. 2015 saw the Australian premiere of every/nowhere (★★★★½ - The West Australian, WA winner Best Dance Award), an immersive performance for an intimate audience combining poetry, improvisation and guided interactions. She was awarded a 2014 MoveMe Improvisation Scholarship and is a multi-year recipient of the Ars Musica Australis Fellowship for Emerging Artists. 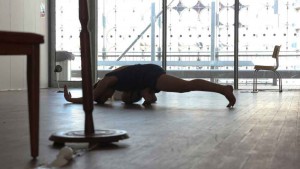 Performance for an audience of 10 forging a path between identities, places and states of awareness This project part of the ASSEMBLY symposium event Program