A walking performance which explores how first peoples of Melbourne and New Zealand value place.

Walk on Fallow Lands #2 is a performance work that invites people to walk the land – and engage with the heavy and multiple narratives of colonisation – thereby excavating the multiple histories in the landscape. The act of walking, as ritual and guiding, brings forth oral histories and a valuing of land. The work simultaneously proposes an engagement with two indigenous worldviews. With reference to her homeland, Aotearoa/New Zealand, the artist traces her Maori temporality and whakapapa (geneaology) back to Papatuanuku the Earth Mother and Ranginui the Sky Father, which is fundamental to the way in which Maori value land. Equally, for Aboriginal Australia, many people consider the land as ‘Mother, for she gives birth to us and nurtures us through our life’.

Aboriginal and Maori people have expressed and shared these ideas through oral history and language, which have been threatened (and sometimes eliminated) by colonial structures, identities and formations. Walk on Fallow Lands #2 thereby draws on a Maori view of history that requires an understanding of whakapapa in affirming identity. The saying ‘I nga wa o mua’ alludes to the past being something that lies in front of you, rather than something you leave behind, and illustrates a cyclical view of history as each person is added to whakapapa, and the story moves forward, bringing the past with it.

In honouring the memories and myths of significance to the first peoples of Australia, and presenting these through a Maori lens, the artists seeks to disrupt Western narratives of place by removing dominant hierarchies. ‘Just as when I am walking, my feet are the waka and I carry the embodied knowledge within me.’

This walk is being conducted with blessings from the Wurundjeri Tribe Land and Cultural Heritage Council. With the support of Creative New Zealand.

Traditional fallowing is a conservation land management practice that allows for natural regeneration of soil. It is an ancient agricultural practice of resting soil, one way of ensuring sustainable food production and future food security. Practiced for generations by First Australians and Maori peoples who valued and understood the cyclical nature of rest and regeneration, it was largely unrecognised and dismissed by colonial agriculturalists and pastoralists interested in maximising yields on the same land. Historian Bill Gammage argues that Australia pre-colonisation was a ‘farm without fences’, where Aboriginal Australians systematically cultivated land by fusing ecological philosophy with theology and The Dreaming.1 First Australians’ comprehensive and intimate knowledge of land sustained them for over 50,000 years, which Australian Indigenous writer Bruce Pascoe contends ‘has been grossly undervalued for the past 200 years’.2 As such, the research and evidence uncovered by Gammage and Pascoe challenges the Western myth that Aboriginal Australians were nomadic hunter-gatherers.

In the Western world, intensive agricultural practices (which have a low fallow ratio to maximise commercial yields) combined with rapid urbanisation have resulted in impoverished soils and denuded landscapes. Newton and Ashton contend that, as a consequence, there is a complete ‘disjunction between where we are, and what we eat’3 in Australia. Almost all of our basic nourishment needs are caught up in a complex commercial agricultural network, to the extent that many of us have lost basic knowledge and skills to feed ourselves. In the Western world, ‘reliance on convenience, supply chains and industrious production processes have superseded our understanding of localised seasonal harvests, sustainable permaculture’4 and Indigenous land management. More extreme and unpredictable weather events, along with declining water availability as a result of climate change, directly and indirectly pose significant risks to our future food supply in Australia. The feast is over. A sustainable future relies on how we live in the land – what we cultivate and how we fallow.

Watching Angela Kilford prepare for her performance walk Walk on Fallow Lands #2 – folding army-issued wool blankets, preparing maps, filling water bottles and wrapping bread – immediately piqued my interest. Her props, specifically the bread and blankets, reminded me of the smallpox-infested blankets given to Aboriginal peoples during colonisation, and the lost recipes of Indigenous breads, many of which are now adulterated by wheat flour, sugar and lard. Was she going to guide us through a colonial reenactment, or takes us on a pedestrian urban survival course and feed us at the end?

Angela Kilford uses the term fallow metaphorically, as a way of unearthing multiple layers of history and meaning in the urban landscape. She invites participants to walk in the land, while engaging with two Indigenous worldviews simultaneously. At analogous Melbourne landmarks, ritual acts of handwashing, walking and listening together draw participants in close where Kilford reveals intimate stories about time, energy, water and fire from her Maori heritage. It is an iterative and reflective performance evolving over five days, summoning reciprocal dialogue about the ways we value land and different knowledge systems in spaces where dominant colonial narratives continue to reign. The guided walk ends at Birrarung Marr, a culturally significant site of the Wurundjeri people of the Kulin Nation. Here, Kilford serves the participants rewena paraoa, a traditional Maori sourdough potato bread. I take note that it is made with wheat flour. Like the indigenous bread (Bannock – La Galette) of my own Canadian Metis heritage, once made with flours from wild plants and moss, rewena paraoa is also a melding of old and new agricultural knowledge and cultural traditions. In a time of increasing uncertainty, reconnecting with Indigenous agricultural practices may well ensure land regeneration and future food security in Australia. 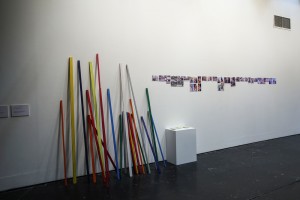