MARP is a growing collective of associates from Australia and abroad - artists, performers, musicians and others whose creative acts go under the radar. Formed in 2013 by Anthony Pelchen, MARP appeared later that year at the Natimuk Frinj festival, NW Victoria and at the Melaka Art & Performance festival, Malaysia, 2014.
Anthony Pelchen is a cross-media visual artist and since the late 1990’s has periodically collaborated with Melbourne based dancer/choreographer Tony Yap. In 2009 Tony Yap formed the annual Melaka Art & Performance Festival (MAPFest), inviting Anthony Pelchen to present installation work and curate a visual arts program. New venue relationships were formed with a number of key institutions and alternative venues, including Soong Ro Ger's Baboon House Café in central Melaka.
Soong Ro Ger (Roger) and Andy Lim Kah Meng operate the Baboon House. With backgrounds in Engineering and Naval Navigation, they regularly disappear up rivers and into rainforests. Slovakian photographer, Monica Benova, was based in Melaka and collaborated with Roger for various photo based installation projects and the formation of IN-Fest, showcasing local artists.
Kavisha Mazzella is an accomplished Australian singer/songwriter, awarded the Order of Australia for her considerable work with senior Italian women and social justice causes. In 2002 she co-wrote with writer Arnold Zable, All God's Beggars - an anthem for Refugees and central to MARP.
Dunkeld based Trevor Flinn has a practice blurring making and performing. In 2012-14 he was commissioned for the inaugural series of regional 'TWIG' projects.
A long time collaborator with Kavisha Mazzella and Anthony Pelchen, Andrew Lindsay is an accomplished writer and Lecoq trained performer based in Sydney.
All other associates live and work in the vicinity of Pelchen’s base on the Wimmera River, near Natimuk, NW Victoria: Alison Eggleton has a textile based sculptural practice and is curator at the Horsham Regional Art Gallery; Robert Millar is a musician, sound artist and director of Rat Hole Records; Frank Tagliabue is a sculptor of the miniscule; Karin Matsuda is a former Tokyo based Indian Astrology Life Coach; Pete Grey a man of understated but accomplished improvised making and adventure. 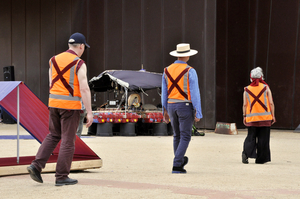 A one-day performance installation vessel bringing others on board. This project part of the PASSAGES mobile performance Program