Chris Barry is an independent artist and scholar based in Melbourne. She was awarded the degree of Doctor of Philosophy (University of Melbourne) in May 2009 entitled, “The Encounter of Culture: A Shared Space or Out of Place? Dismantling the Self in Central Australia”. During the past fourteen years she has been conducting her research and practice amongst specific Aboriginal families living in Alice Springs, Northern Territory. Her research explores the mediation between photography, performance, and auto/biography—within the fluidity of Aboriginal sociality and sociability—and the colluding space between culture and cultural production.

Issues of marginality, ethnicity, indigeneity, contested homelands, spatial conflicts, and identity politics, continue to inform her practice and writing. Currently she is contracted by Tangentyere Council as Studio Manager and works closely with town camp artists who reside amongst the 22 town camps located throughout the township of Alice Springs. 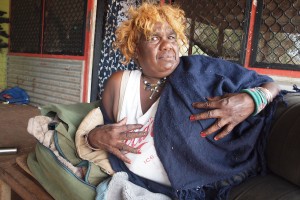 A photographic/video project based in Alice Springs. This project part of the TRACES gallery exposition Program