Pan & Zoom take the effects inscribed in the global language of cinema and turn them into performative and participatory image-making apparatuses. Jondi Keane and Kaya Barry’s installation invites visitors to collaborate in the construction of the images in order to re-explore relations between media technologies and embodied experience. The result is an expanded, amplified and dilated experience of the performative power of image-making and image-viewing.

Pan activates an accumulating collection of moving panoramic images – provided by Kaya Barry and PSi Fluid States participants from around the world – that visitors may interactively inhabit. The visitor manipulates relationships between an image projector mounted upon a dolly track, and a trackpad that scrolls the projected panorama. The live event of constructing-perceiving panoramic tracking shots opens up in ways that expand sensory experience beyond usual peripheries.

Zoom co-opts the ‘dolly-zoom’ effect in cinema – wherein the camera zooms in while moving backward or zooms out while moving forward – resulting in the image expanding to amplify an intense moment of realisation. Hitchcock developed this technique in Vertigo to show audiences how the protagonist experiences his fear of heights. Jondi Keane pulls apart the double movement of the camera effect by himself performing the pulling back and forth of a moving wall as a backdrop. Moments of realisation are created between visitors who take up the camera operation, and an improvising actor’s role, to accompany Keane’s durational wall moving. An updating collection of filmic moments made throughout the installation duration screen ‘on-set’.

Amongst the pervasive languages of cinema, photography, television and mobile media, Pan & Zoom explores how audiences here are performative inter-actors, rendering the image toward the body’s expansive inhabitations of space, and challenging the grip of technological seduction.

Zoom: According to Merleau-Ponty, perception typically forgets its origin in the body and loses itself in the object. I watch this screen, vaguely registering the tap of my fingers on the keyboard, but give no thought as to the curve of my spine, the droop of my jaw. The gestures of the camera are equally implicit. They guide my vision, which is completely preoccupied with its object. Such is the lure of the image-object. The camera is my visual delegate, my perceptual agent in charge of the scenic field. But I have forgotten all this.

Jump cut – Jondi Keane shoulders a strange burden: a large photographic image of an urban scene. He picks up two large ropes and tugs this scene towards a camera. Next, he leans and thrusts, pushing the image away. Zooming in, zooming out. His sweat equity lends weight to the work behind the image. Our bodies now join this trio between Jondi, the camera and its image-object. It looks like a play when we re-play the camera’s recordings, as if the recorded image were this work’s ultimate destination, more important than our lived experience in the making. The image takes over – so easy to be seduced by what things look like, digitally immortalised. But memory plays its own game. It’s not the images of the screen-dance that stay with me but the feel of Jondi’s body pushing, pulling, dragging, leaning, sweating.

Pan: And now it’s our own bodies who must do the work. We slide a camera along tracks to reveal another kind of scene. It’s odd, the marked parallelism of the tracks serially unfolds images which are purportedly panoramic. A linear revelation of that which ought to be circular, 360 degrees, flanking our corporeal point of view from all sides. We are the agents of these images appearing. They are linear but also sutured; consisting of very different scenes, content, colours and vistas. One scene after another slides into view, posed against another kind of backdrop: the nuts and bolts of the space itself, metal struts, boards, supports. This is weird. The emergent panorama moves one way, the supporting backdrop slips the other way. It’s like backing a trailer down a driveway.

The camera’s pan and zoom are, by now, gestures of the cinematic every day: their movements are habitual, implicit, hardly noticeable. Pan & Zoom make a play out of these techniques. Yet nothing happens unless and until we enter these mini-worlds. When I was little, I loved London’s Science Museum because there were knobs to push, buttons to press.Pan & Zoom are like those little glass cases with their knobs and buttons. To push those buttons is to reveal something, to unravel the mysterious. We are inside these ‘cases’, however, a part of their mystery. Our participation in these adaptations of cinematic technique puts our bodies in the foreground, not as objects but as agents. The visual field is thereby converted into a domain of actions and interactions, between bodies (camera, artist, participant), but also within a volatile dynamic of image, experience and perception.

WALKING UPSTREAM: WATERWAYS OF THE ILLAWARRA 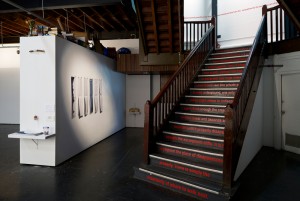 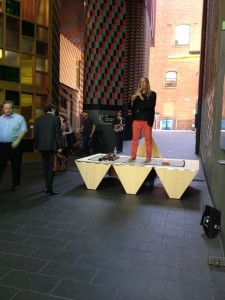